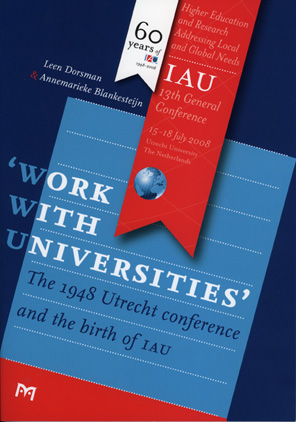 ‘Work with Universities’. The 1948 Utrecht conference and the birth of IAU

In the summer of 1948 nearly 200 representatives of universities from all over the world met at a conference in Utrecht, the Netherlands. They were invited by Unesco and the Dutch government to discuss their common future and to investigate the possibilities of a new international organisation. To bring about world peace and to further the development of nations throughout the world Unesco considered it of the greatest importance that all universities should work together.

Initially, the initiative by Unesco was met with scepticism, but at the end, the chairman of the conference, Dutch chemist Hugo Kruyt, told the audience that he was ‘amazed’, even ‘thrilled’ by its results. One of the concrete results of the Utrecht conference was the decision to found a new organisation for academic cooperation. Eventually, this became the International Association of Universities.

In this publication the story is told of the Utrecht conference of 1948. It focuses on the preparations for the conference in Paris and the discussions in Utrecht, and ends with the final resolution to establish IAU in Nice in 1950.